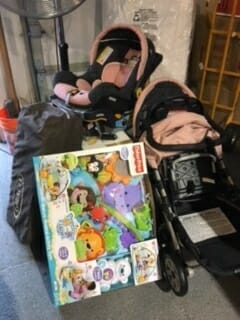 A little baby girl plans to arrive in two weeks. She has no idea, but her mom had a divine appointment here at The Giving Closet today…

Yesterday, a man called on the phone with some baby items to donate. It became clear when he said he was donating an entire nursery that there was a story behind his request. Usually, we do not accept some of the things he was bringing, but we felt the need to be available to him. He brought his things in and all of them were new. Brand new boxes, tags, beautiful items bought in the joy of a baby girl on her way to join the family. This couple decided they were ready to let go and bless someone in need with their baby girl’s things. She died six years ago and never got the chance to use them.

We were able to share these beautiful new things with a mom who is alone, homeless and living in a friend’s spare room at the moment after fleeing an unhealthy relationship. She had nothing but a few clothes for her baby. We were able to share with her a bit of the story we knew and the timing of this tender gift her new daughter, Andrea, was about to receive. She asked for the man’s address so she could send them a thank you note.

We never got this man’s name.

It became very clear that God had a plan all along. Today, He transformed one family’s loss, despair, and sadness into LIFE, HOPE and PROVISION for baby Andrea.